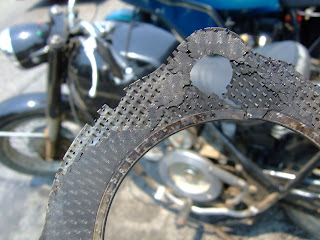 Every year there is the Moto Melee. A hundred vintage bikes take off to tour California in 1000 mile, 3 day tour.

I know the date in advance, end of June, always, yet, when do I start working on my bike? On the Sunday 6 days before departure.

Well, I'm a mechanic. My bikes don't break down, do they? Besides, it ran fine last time a rode it. 4 years ago. Wait, it kinda didn't want to idle so well. And it wouldn't start so well either then. As a matter of fact, now that I think about it, it wouldn't start at all, and it was summer and I was really busy at the shop and so I just parked it. It couldn't be more than a little points adjustment or blowing out the idle jet, could it? What could possibly wrong with it?

Just one little but crucial thing. I just didn't know it yet.

So on the Sunday 6 days before departure I gave the bike a full tune up, overhauled the carburetor, tightened all the bolts, replaced worn out rubber things and gave it a wash. THEN I kicked it over. Surprise! No compression! Now that's pretty crucial. Actually: that is one of the three crucial things: Spark, gas and compression. But no compression. As in: I put my finger in the spark plug hole and it does not get blown out. At all.

Instead, all the air goes out the side.

That would indicate a blown head gasket, see picture. Now my 1971 Moto Guzzi Nuovo Falcome is really nothing too special, except for you can't get parts in the United States for it.

I text my friend Jutta in Germany, despite being in the middle of night for her, and ask her to express me a top end gasket kit from Germany. She calls IMT Munich on Monday, they work on Moto Guzzis all day, and they have the head gasket in stock.

It turns out Marc who works there owes me a favor, and he hooks me up with a head gasket, and Jutta picks it up there and then it gets picked up from her house by the post office on Tuesday, and it appears at my doorstep on Wednesday, 40 Euros later. Thanks Jutta and Marc, you are the best!

Phew! So on Wednesday night and Thursday early morning I overhaul the top end and kick! Kick! Kick! It fires up!

I feel very lucky to have friends across the big pond.

Then test drive Thursday night, Friday night, and off I go on Saturday morning. And it ran great! The engine didn't leak, and besides re-torquing the head on the Sunday morning in the parking lot to avoid another blown head gasket, I really didn't have any major problems.

For a vintage bike that is anyway. You know, this used to be my daily commuter for two years 19 years ago. Now I remember how I became a mechanic beside the apprenticeship: fixing things on my vintage bike that needed a lot off attention.

So after this Melee it only needs a few things. Just a few. Like: Steering bearings, the forks need a rebuild since they are not much more than pogo sticks anymore, the brakes are terrible and need to be redone, shocks are now blown, the headlight and the taillight gave out, the tank mounts broke off and the ignition switch is on its last leg. Plus I REALLY would like a 5 speed transmission. It's a never ending story.

And although I had such a blast I really appreciated the KTM afterwards. So smooth, with brakes, real suspension, and lights. I never thought I would call the KTM smooth. But in comparison...Modern technology. The world has made progress. A lot of progress. It's not as cute as the Guzzi, but hey. Can't have everything.

Well, I blame the 1000 miles of all the rough back roads we did in those 3 unforgettable days, and the dirt roads. A lot of fun, and absolutely beautiful, like a dream, but also a lot of vibration. And since the Guzzi is really not a dirt bike, I shouldn't be too surprised. It looks like one now, see picture. Judging from the dirt that is...

And when am I going to start working on it again? That's right. The Sunday before the next Melee. Or maybe I'll do it this winter. I'll make myself a reminder. Really. I swear. 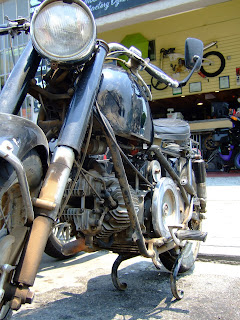 Needless to say though this was SO MUCH FUN. I had great ride companions and the roads were awesome. Ute, Johnny, Ben and Steve were great. And thanks Harley and Jeff for putting on 11 years of Moto Melee by now.

We made it through some mishaps together, especially Ben, who had all kinds of problems and crashed twice, but got right back up and made it through the whole ride. He also got the Willy Makit Award for that at the Banquet Monday night.

I'll write another blog about all that later. Probably on this blog. Keep posted!
Posted by Jennifer Werkstatt at 7:38 PM No comments: