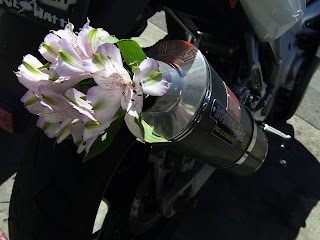 If you live where I live (San Francisco) you are probably getting really sick of all those foot print people, wishing you could put a foot print up theirs by now.

Nevertheless, they have a point, and I'm personally glad that people are starting to catch onto the fact that we are changing our environment, and not always to the better, since the industrial revolution...

Since I grew up in Germany where environmental awareness was fed to me with my mother's breast milk, and since I still like our environment a whole lot, especially when I ride a motorcycle around in it, I set out to find the truth about the carbon foot print of motorcycles.

My hope was to be able to say: By merely riding a motorcycle instead of a car I am a good person sparing the environment.

Unfortunately, motorcycles are not really included in most carbon footprint calculators, but after some research, I came to this conclusion:

Yes, if you ride a motorcycle, you emit less green house gases (CO2), by sheer better gas mileage and also by shorter travel times, especially in California where you can split lanes and won't have to take part in traffic jams :)

And if you use a scooter to get around town, it could be up to 100 mls/gl.

And to produce and then recycle a motorcycle must be generating a smaller carbon foot print than a car's.

But: other pollutants, like CO and HC, are directly bad for people breathing them, and unfortunately motorcycle emissions seem to exceed the emissions of cars, even with a catalytic converter according to some sources.

So while I really would like to be able to say that riding a motorcycle is better than driving a car, unfortunately it isn't quite so.

Anyway, I think riding motorcycles is definitely a little better and one way to make a difference, all the while having a lot more fun than sitting in traffic in a car.

And using that other type of two wheeled transportation for cross training was never a bad idea anyway. Keeps ya in shape for those track days when you need endurance to ride every single session until the sun goes down.

Which makes my carbon foot print bigger again I know, so I repent by commuting (aka training) with the push bike. It's kind of like in the medieaval world where you could sin and then pay it off to the church with monetary means. I wonder why that went out of fashion?

P.S. I would appreciate any comments that shed more light on this issue or the motorcycle carbon foot print.

Happy two wheeling in the meantime!
Posted by Jennifer Werkstatt at 11:01 AM 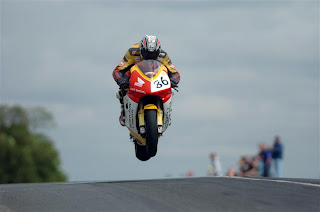 This is Wade Boyd, at the Isle of Man racing, and, as you can probably imagine, a favorite among spectators. He has been racing the Isle of Man for 14 years.
But this year he has been denied: they booted him out in favor of bigger teams with more money and newcomers.

And they didn't let him know until 8 weeks before the race, and the bike, ready to be shipped from the US to the Isle of Man in the UK, had to be pulled off the container when it was just about to leave.

The bike, a 2007 Yamaha R1, owned by Urban Moto Magazine, and sponsored with parts and labor by many people, Werkstatt included, was race ready and being worked on since last year.

You would think that a race organization that is this year celebrating its 100th year would have more sense than booting a veteran international competitor off the race and then not letting him know until the last minute.

If anybody is dedicated to racing, it would be Wade Boyd, so I need your support to get him to race the Isle of Man.

Incidentally, Wade Boyd, of Subculture Racing, also happens to be the man that got me into racing sidecars in 1999. Generous man that he is, he just GAVE me a sidecar to race with my best friend Christine Blunck, who is now also Wade's girl friend of 7 years. We went on to win a few races with our itty-bitty 600cc sidecar, beating the big boys with their 1000cc, and making 5th place overall in the nation in our last year racing (I used to be fast...).

But that aside, I think not letting Wade race is super unfair, and I have filed a petition, which can be accessed at

and if you agree with me, please sign the petition to sway the organizers to let Wade race.

If you need more information about Wade Boyd, you can go to www.wadeboyd.com.

Thanks a lot in advance!

Wade got denied entry again after a special meeting in the Isle of Man. He will most likely still attend the races, as a spectator and supporter.

I'm not sure if I would attend were I in his shoes, I'd be too mad. But that goes to proof that Wade just loves the TT, should be racing, and that he is a true sports man to boot. Go Wade, and good luck for next year!

And thanks everybody for your support and for the 1500 signatures we were able to collect. Although we didn't succeed with the petition, standing up for far beats just rolling over to the Man, doesn't it? 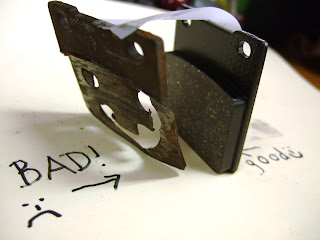 So what's a moon slice you ask?

Originally, it's a slice of bread that is so thin, that you can actually see the moon through it. According to my Dad anyway.

This here brake pad is also a moon slice if I ever saw one. And definitely a worthy member of the Hall of Shame. You sure can see the moon through it. And the light that shines through it, actually makes a moon like shape...see that? Right there on the left?
There is a fun side to everything...

But seriously now: this would be the product of "my brakes have been making noise for weeks, but I haven't had time to take care of it".

The problem is: if you grind the brakes down that far, not only will you have to change the pads, but now the caliper piston and the rotor also need to be replaced, and the caliper needs to be taken apart and rebuilt. You just went from a $70 job to a $400 job for each brake rotor and caliper overhaul, and if you have dual discs, just double that amount. And the parts are probably not in stock, and you're going to have to wait a week to order, and you can't ride, and it just generally sucks.

I won't mention the seriously reduced braking power, but I'm sure you knew that...

So when your bike is talking to ya, look at it, find out why it's making noises, every time, not just every blue moon...your bike, and your wallet, will thank you.
Posted by Jennifer Werkstatt at 4:06 PM 2 comments: 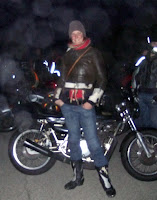 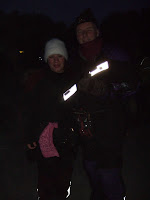 5.30am. The Mighty Kawasaki Rickman CR and me made it up the Mount Tamalpais on Easter Sunday morning to watch the sun rise. Wade Boyd and my best friend Christine Blunck are also here. They are Subculture Racing and I used to race sidecars with them - Wade sponsored us the sidecar, and Christine was my brave monkey, I mean, side car passenger.
Hard to tell who else is here yet, too dark. Lots of Aerostich people though, check out all those reflectors! 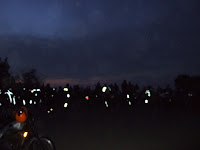 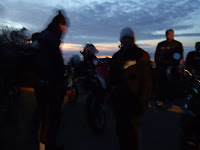 Here is another one of Wade. And Abi! She's looking like one happy Easter bunny, with one of the donuts that the Zeitgeist girls were giving out...Jeez, it's 5 in the morning and freezing! Don't look so happy!
Wade's not so happy right now, since after racing the Isle of Man TT for 14 years, they won't let him race this year. Island politics. It's a big deal, and it really sucks, with all the effort that went into getting everything ready for it, and Urban Moto Magazine sponsoring him this year, too. The race bike was prepped, tickets bought, accommodations etc. prepared for, and now the bike had to be pulled off the container that was just about to leave to England. Terrible disappointment. 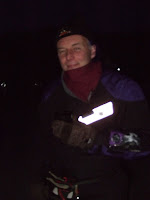 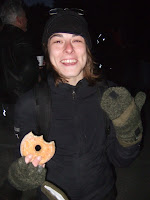 How many of these people have Long Johns on, or two Long John's, like me? Kept me pretty warm! Highly recommended. 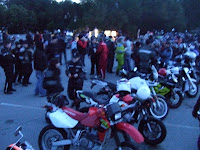 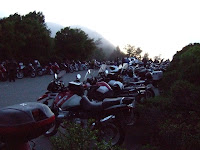 There must've been 500 bikes there. A lot of them lined up on the way to the parking lot. Last year, when it was raining down so hard that we were soaked to the undies in 5 minutes flat (it didn't rain on the way out of San Francisco, so why bother with a pesky rain suit?), only about 50 people showed up. It was nice to see everybody this time. And a belated thanks to Joey Perrault who lit the way for me when my head light conked out on the way up last year.This time, no electrical problems, only the fender worked it's way loose from the original hose clamps over the bumpy road, and dug a groove in my front tire...nothing that couldn't be fixed on the side of the road though. 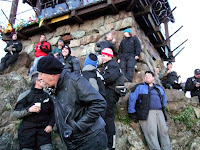 All the way to the top, 300 gruesome yards steeply uphill from the parking lot in riding boots feeling big like the Michelin Man with all the layers I had on, with little food or coffee in my belly, this was the reward: the fog was blowing hard over the top, it was freezing, and beautiful. Totally worth it. 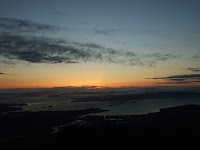 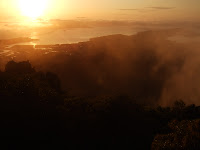 And this is the official start of the riding season. So Happy Trails y'all, rubber side down and shiny side up, enjoy all the beautiful sun rises and sun sets you can take, and have a great season!

Posted by Jennifer Werkstatt at 11:39 AM No comments: 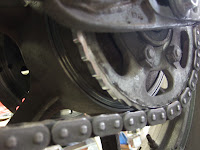 Once upon a time there was a dear little motorcycle that was loved by every one who looked at it, but most of all by its owner, and there was nothing that he would not have given to the motorcycle, the problem was, he never really looked at it too closely, except he was giving it a bath all the time, but he never looked beyond the shiny parts.

Once he got the bike he also got a red helmet which suited him so well that he would never wear anything else; so he was always called "Little Red Riding Helmet".

"Oh! motorcycle," he said, "how come you make loud noises and seem to be skipping when I get on the gas like that?"

"Oh I was trying to be cute and just be skipping along" was the reply.

"But, motorcycle, how low to the ground your chain hangs!" he said.

"Low riding is where it's at these days, my dear."

"Oh! but, my motorcycle, how terribly round your sprocket is and all your teeth are missing!"

"The better for the chain to jump the sprocket, lock up your wheel and make you eat it! Harharaharharhar!"

And scarcely had the motorcycle said this, than with one bound the chain came off, locked up the rear wheel and Little Red Riding Helmet ate it.

So what did we learn from this, kids? If you want to trust your motorcycle, look at it every once in a while, make sure the nice parts didn't turn into bad parts with regular wear and tear, listen for the signs and funny noises, and do something about it or ask somebody that knows and you will live happily ever after!

P.S. Believe it or not, this bike was actually ridden to the shop, chain super tight, pure friction making the rear wheel go round, and it could've ruined the output shaft bearing, but it did not, so it must have that rider's lucky day...didn't die and didn't brake anything else...