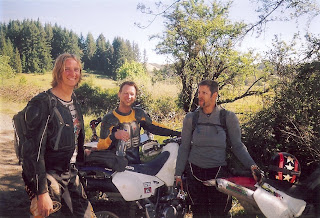 This weekend I did the Sheetiron 300, which is a dual sport ride starting in Stonyford, then goes over the Sheetiron Mountain and ends up in Fort Bragg and back in 2 days, organized by the OMC.

The only street legal dual sport I have is my (since I did a bunch of work to it, now hopefully...) trustworthy KTM 950 Adventure. I bought it last year and prepped it to go to Mexico with but alas the water pump failed and I ended up taking a trustworthy KLR instead. But finally the Sheetiron gave me a chance to figure out the dirt with the beast.

I met John Sweeney, a friend from the SFMC at a Mill Valley coffee shop and we took the scenic route up to Stonyford where the temperature was like 109F. So once we got there and met up with the SFMC we kicked back and drank a couple of beers, made dinner and retired to our tents early.

The next day we got started fairly early, like 7.45. Could have been earlier, but have you ever tried getting 10 guys to leave from somewhere?

I was a little tentative about taking the big KTM over the dirt and people kept saying, you're riding THAT THING?

But it handled - great! Once I learned how to control it in the corners with the throttle I was having a blast! At the end of day 2 I was able to pass some people on smaller bikes to get away from the dust.

And dusty it was. At times all you could do is chase the taillight in front of you and trust it was going the right way. Since they were all street legal enduros, fortunately everybody had one. I'm still coughing up the dust though, and all day I had grit in my teeth...

I drank a lot of water, like a gallon and a half. And you have to, because all hat keeps you cool is the evaporating sweat. The breeze doesn't do anything, it's just like a hair dryer.

We were all really looking forward to Fort Bragg where we knew it would be cold and foggy, and that's how it was. 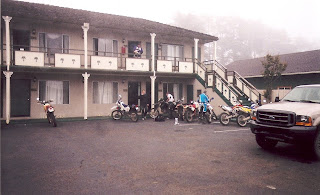 You can see the fog in the picture of the Oceanside Hotel, formerly the Driftwood, which has cheap, charming and rustic accommodations. Read between the lines...but it must have like150 rooms or so and is perfect for a ride like this.

At the luggage pick up everybody got their photo taken and I got a button with my own picture on it, that was a fun souvenir! I think I give it to my Mom...

At the hotel I checked the oil and the air filter, which was pretty dusty, so I cleaned it a little and then went to get dinner at a fancy restaurant above a gallery space in Fort Bragg. Excellent natural beef and organic vegetables. Just the right thing after a dusty ride like that.

And back the next day. This time a different route, mostly easy fire roads, lunch in a little town, BBQ on the side of the road, organized through the OMC by local restaurants. Got back around 3, waited out the heat before I squeezed back into my full suit, and blazed home...got there at 9pm, took a shower, plunged into the hot tub.

Perfect weekend. Can't wait to do it again next year...Nothing like swallowing dust, working hard in 100F, with 500 other crazies...
Posted by Jennifer Werkstatt at 1:04 PM 1 comment: