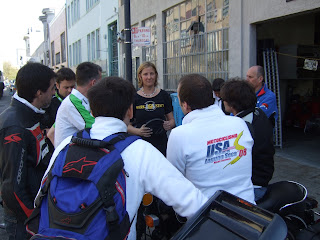 About a month ago or so I get a call from Italy. Motociclismo magazine wants to use our Factory Eddy Current EC997 dyno to do a comparison test on 7 bikes before they go to Laguna Seca to do a bike comparison.

Wow, I'm honored! This is a very big magazine in Europe, and I'm really jazzed to have them coming to my shop!

So they show up on Tuesday morning at the shop. 7 bikes, 7 drivers, a couple of technicians, camera man, and a couple of what looks like the general managers of this trip. I don't get everybody's exact function, but there they are, 14 Italians, starting to mill about the shop and discussing the best strategy in Italian.

Nothing like being surrounded by a LOT of Italians with those Oh-my-god-so-sexy-Italian-accents. You know, like Valentino. Mmmmh.

First up is the KTM RC8. That isn't even available in the States yet, and I really like the look of it. It makes good horsepower, but not as much as the Ducati. 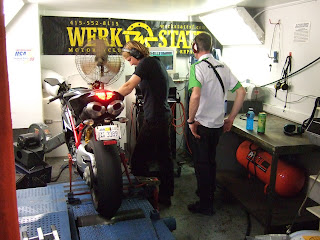 Next is the GSXR1000 which will make the most horsepower, as expected. I'm a real big Gixxer fan, having had a 1989 as my first 4 cylinder sport bike and then a 2001 GSXR750 as my daily rider, canyon carver and ultimately race bike. I just sold it because the miles were getting up there, and it was a little neglected over my new KTM 950 Adventure. I miss it, and my next sport bike will definitely be a GSXR again.

Anyway, next is the Kawasaki ZX10R. Decent power, although not as much as the Kawasaki Italy guy would have liked. He stays with me over all the tests, while the rest of the crew hangs out in the shop, outside with the bikes, making interviews and videos and pictures. I hear about all the happenings outside the shop later. For three hours the dyno is my little world, all science and no fluff.

The R1 I am having problems with. It starts out fine, then the graph goes haywire, it's loosing power. I re-strap it to the dyno, thinking that the wheel is slipping on the rollers. This time it makes less horsepower overall, 13hp less at its worst. I recalibrate the dyno, but no difference. I pull it off, since it has been on the dyno quite a while at this point, and I am thinking it is just getting too hot to make accurate readings.

Next up is the MV Agusta F4 1078. It makes beaucoup horsepower. That assures me that the dyno is reading accurately. The MV gets within a couple of horsepower of the mighty GSXR. The seating position is extreme. My shoulders are directly over my hands, and it does feel like my butt is over my head (which is how Harley Welch puts it later when I tell him about it).

The Ducati 1098 power graph is amazing, it rises like a rocket, although it cuts out at 10500 and has less power than the Japanese bikes, but that kind of power development is going to be a blast in the actual world. It better be with a price tag of $40,000.

The Honda CBR1000 has the smoothest power band but boy does it get hot quickly. I have to let it cool down a lot between runs to stay in the same heat range for accurate comparisons purposes.

The Ducati and R1 runs are somewhat questionable, the Ducati makes more power than expected, and the R1 less. But since they need to tour the City and make pictures to prove they have been here, I let them go and ask them to come back in the evening to repeat the tests. 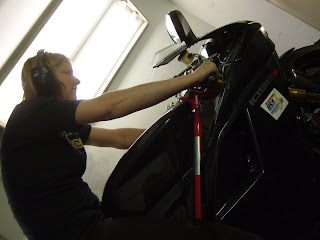 After they make pictures on Twin Peaks and Lombard Streets, a couple of them return for the re-runs, which show the same result as in the morning. On the R1 issue, I think something happened, like a spark plug burnt, or the cap went bad. It's a big power drop, and it wasn't the dyno, because the MV showed plenty of power right after.

We are done around 7.30. I feel the pleasant tiredness of a fun day. I close the shop and go to the Ace Cafe on Mission Street to share my day and brag a little. Here are some pictures.

On Friday I'm going to Laguna Seca to see how the test is going. I'll be there for half a day, then I get back to the City to get a ride to Buttonwillow for the AFM races. It'll be going from the Il Grande Mondo di Motocicli back to our Mundane Greater Bay Area Motorcycle Happenings.

And I like my little Bay Area Motorcycle World. In my opinion: One of the best worlds on this planet.
Posted by Jennifer Werkstatt at 9:15 PM 1 comment:

Dayona on Tuesday - the race is on! 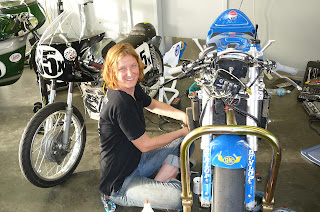 So that's me wrenching on the bike for final touch ups on the bike in the morning. I check and double check to make sure all the bolts are tight. Gas? Check. Tire pressure? Check. Tire warmers? Check.

Ready for first practice. I get on the pit scooter and speed though the pits to the banking and actually beat the race bikes there. It's a beeline for me, and all the way around the track for the bikes.

I want to get some pictures of Jim on the banking. The engine is holding, top speed is down, but hey, Jim gets to race.

When the flag drops, Jim keeps up with his main competitor Kevin Keith all the way through the infield, then he starts walking away. Not much though! Just a little bit every lap. With the big horsepower engine I think Jim would have had him covered.

He finishes second, in both races. Trophy time! Not bad for all the bad luck we had. I am very happy about it. 2 second places in Daytona?

What's more awesome than that? 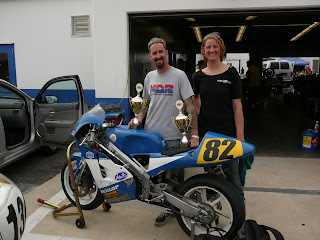 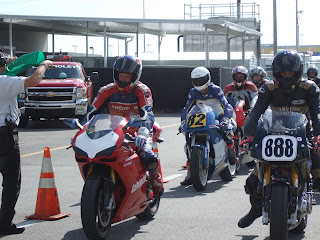 It's Monday in Daytona. 2 practice sessions, then the race. Jim's going good, faster than his main competitor, he's ready to race.

But when he comes in, the engine lost power. Worse, it's making a really loud knocking sound. Like a midget jumped into the fairings and bangs the engine with a steel hammer, as Jim puts it. That's not good.

We tear off the tank, the valve cover. Everything looks good, and the cam chain is tight. We take off the compression release valve which is the only thing that looks suspicious.

Back on the roller to start the bike. Nothing has changed. If anything, it got worse. Somebody comes by and suggests the lower end bearings of the con rod. The noise it so loud and high pitched that it either is the cam chain or the rod is about to stick itself out the case.

Either way, it's definitely in the engine, and it needs to come out. Fortunately we have a spare engine in the truck. So we get out our measly supply of tools, and beg and borrow more special tools together, and yank the engine. 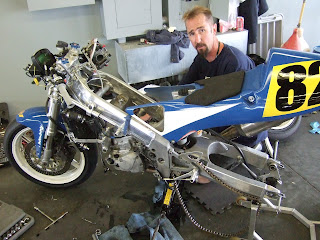 Draining the oil shows golden debris. Pretty? Yes. But it means that the engine needs a full rebuild when we get back and it is indeed the lower end bearing. The only thing that is golden in the engine. We feel lucky that it didn't lock up on the banking causing Jim to crash...

We swap the engine, run into a couple snafus, and don't make either race. But we get it running by 6pm. Which means we are ready to race tomorrow. Awesome!

This engine is stock though, down more than a few horsepower from the Biggen that Jim's brother Joe built, and we have big doubts if this engine will make it through practice and the race.

Daytona is notoriously hard on engines, with the tri-oval banking being half of the track, wide open, for close to a minute every lap, and there are 6 of them.

I'm nervous, Jim is nervous, if the engine lets go again and locks up - that cold result in a crash.

We leave the track for food and margaritas. It's Jim's birthday today after all, he's turning the big four-O...and after wrenching all day we all deserve a good meal! And a good night's sleep.

Race is on tomorrow! 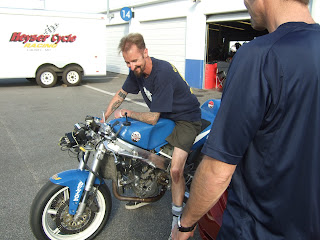 Posted by Jennifer Werkstatt at 6:38 PM No comments: