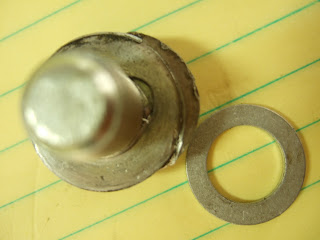 This is a drain plug with a very mangled sealing washer. You cannot see it in this picture, but it is very thin, much thinner that it should be, and, as you can see in this picture, a lot bigger then when it was new.

How do drain plug washers grow that much bigger you ask?

Well, for example, if somebody cranks the drain plug tight like they took a double portion of steroids that morning with no regards to the gentle needs of an innocent oil drain plug.

Commonly you would think that changing the oil is something that the aspiring hobby mechanic should have no problem doing.

I have seen anything from filling the engine to the top of the filler plug, which would result major drag and no power or non start of the engine, to tightening the drain plug until the lead washer squeezes out on the side, which is the picture you can admire here.

I put a fresh washer next to it to demonstrate just how much this drain plug was tightened. I know, the fear of loosing your oil plug and subsequently the oil over your rear tire with resulting self made oil slick and/or engine damage from oil pressure loss, is grand.

But really people. If the drain washer starts oozing out of the sides of the drain plug like a toothpaste out of the tube, wouldn't you care to think that something is actually WRONG?

The owner of the motorcycle that was accompanied by this squeezy here was lucky, since nothing more happened.

But I have seen it that the engine cases were cracked from asserting too much pressure on the little threads. In which case: you need to take the oil pan off and weld it.

Expensive and a lot of work.

Or: You don't have an oil pan, which older bikes or singles don't typically have, and then you are kinda SOL and either need to live with a leaky pan or do some labor intensive JB weld job every time you change the oil.

So if you are an aspiring mechanic: In your own interest. Do yourself a favor and buy a torque wrench.
Posted by Jennifer Werkstatt at 5:04 PM No comments: 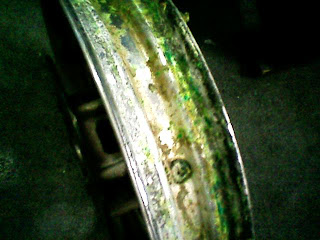 Hopefully this doesn't remind you of your refrigerator after coming back from a 4 week vacation and having forgotten to throw away that food, but if it does, there are similarities.

It's organic matter from a tire emergency fix, called Slime, molded after sitting in the tire for 2 years.

This picture was taken with my cell phone since the battery was dead on my good camera, so it's a little fuzzy, but *I swear* the color was just like that.

Slime is always a pain for the mechanic, since it is, as the name implies, slimy, and has to be removed before a new tire can be mounted.

This bike came in the morning, before I had coffee, and the mechanic wasn't very happy about this either needless to say...

So if there are no plugs handy, and you have to use Slime, would you pretty please come in soon after that and have you tire changed, please, before it molds? It is a temporary fix after all, and not recommended for highway use. Also, once there is Slime in the tire, or Fix-a-Flat for that matter, it can't be safely plugged anymore, and you need a new tire for sure.

It also might be cheaper to have the bike towed to the shop than having to pay the mechanic to clean it up.

But hey, I guess stuff like this comes with the territory. Good thing it wasn't Monday morning though...
Posted by Jennifer Werkstatt at 1:26 PM No comments: