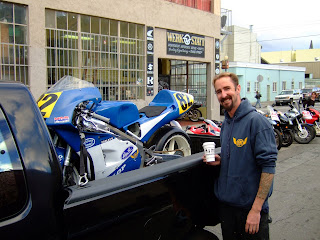 This man here is Jim Hoogerhyde, racer par excellence, with his race bike, on the way to race Daytona Beach.

The bike is a CRF450 Honda engine in a RS250 frame, hoogertuned by his brother Joe, and supported with parts and technical knowledge by Werkstatt.

This picture was taken in front of the shop to show it off in all its glory one more time before it hits hopefully not the ground but rather the race track, first the one in Savannah, Georgia, then Daytona Beach, for the first two AHRMA races of the season.

Today were the races in Savannah, and Jim took a first and second in Supermono and Supermono II, respectively.

Congratulations, Jim! You are now leading the championship with this season opener. Hang on to it!

Next stop: Daytona Beach. The famed bike week at Daytona Beach also hosts the AHRMA races, flat track races, AMA races, and then a lot of hubbub that I don't care too much about, mostly Harley related.

I'm flying out tomorrow night on a red-eye to meet Jim there and help out. My bags are packed.

I got the wear-black-at-the-track-so-the-dirt-won't-show outfit for daytime when there may or may not be a lot of wrenching (as much as I love wrenching, I am sincerely hoping that I won't have to deal with too many emergencies), I got the what-am-I-going-to-wear-to-the-banquet outfit, and I got the umbrella-girl outfit. I'm set!

The Daytona race is the season opener for me, as Werkstatt Racing will be supporting Jim as part of the SFMC (San Francisco Motorcycle Club) race team this year. We will also sponsor Eric Schiller and Mickey Fimbres, part of the SFMC race team, and John Willenborg, who is racing a KTM in Supermoto USA this year.

So I'll try to update this adventure during the time I'm there if I have time, otherwise when I come back! Keep posted!
Posted by Jennifer Werkstatt at 4:38 PM 1 comment: