Back on (the) track 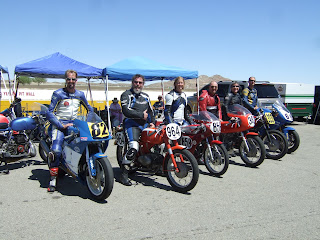 In the picture you can see the San Francisco vintage racing contingent, the ones that made the trek down there, Jim Hoogerhyde, Harley Welch, me, Miles, Johnny Regan and Mickey Fimbres.

Got 3rd in a LeMans style CB160 only race, 8th in both 200 GP and 250, respectively, starting from the back of the grid of about 25 other vintage racers in the AHRMA (American Historic Racing Motorcycle Association).

I got talked into it in Daytona, when I was helping Jim Hoogerhyde race there. His friend Mike Riddle offered to let me race his backup bike for some dyno time. Not sure if he realized that I would take him up on that...and I am still pinching myself to make sure I wasn't dreaming. Mike Riddle had a race ready , great running, awesome little CB160 waiting for me at the track to race when I arrived in Willow Springs.

Coming back to the race track after a good long absence to race myself took a little adjustment. But after the first day I felt like I had never stopped.

Granted, racing a 160 is a little different than racing a GSXR750.

For one, you don't have the horsepower to bail you either out or get you into trouble. By the same token, you pay dearly for every mistake.

Hesitate for a split second on a pass? Opportunity is gone forever. Rolling of the throttle to set up for a turn or to take the edge off? You're toast. You'll never see the competitor in front of you ever again, until the pits.

With 16 horse power and 100mph top speed it is all about the teeny little details that make you win or loose. It's the small things that count in CB160 racing.

Here are a few things of the many I learned this weekend:

Moving smoothly to hang off is crucial since a CB160 is practically a bicycle with an engine and probably weighs less than me, and any rough weight changes were making the bike sway in a way that was altogether unholy especially going into turn 9 at a 100mph and a headwind.

When I was fully tucked head behind the screen and butt on the tail of the bike, my elbows were basically lower than my knees since the Honda CB160 is a very small bike and I'm 6'1". And the difference between staying on the seat or scooting my behind up on the rear hump made me a lot more aerodynamic, translating into a few more rpms and a couple more mph down the straightaway. Oh, and drafting is king.

And I learned to never visualize the size of the CB160 tires when I was leaning into a 100mph turn. They are basically mountain bike tire sized. Yet they will still let you drag you knee at crazy lean angles. This will either make you start laughing insanely inside your helmet, or wither with fear. Since it is not quite predictable which one it is going to be, it's best not to ponder the question.

Thanks Mike Riddle for the bike, thanks Jim Hoooooogerhyde for putting in a word for me and getting me that ride, thanks Debby Welch for making food at the track and Happy Birthday, thanks Johnny Regan for giving me a ride to the track, thanks to everybody for racing. As you can probably tell, all this made me insanely happy. Hmm, racing. I'm glad I'm back.

Also, congrats to Jim Hoooogerhyde whoooo finished 1st both days in Supermono 2, and 2nd and 3rd in Supermono, and 4th in 250GP!

And just in case you don't know what a LeMans start is, here is a video of the Sunday CB160 only 4 lap "exhibition" race (yeah right).

That's the one I got 3rd in. When the checkered fell, I was actually in 5th because I ran low on gas, the bike hesitated on the straightaway in the white flag lap and I had to back off. I managed to nurse it around the track to the checkered flag, got passed by a couple of people and rolled into the pits without any gas...it's those many pesky little details you have to think about when racing. But it turns out we ran a lap too many and they rolled back the results, so I got that 3rd. Woohoo! But I need a pit crew. Anybody? I'm taking applications :)
Posted by Jennifer Werkstatt at 10:50 PM 1 comment: