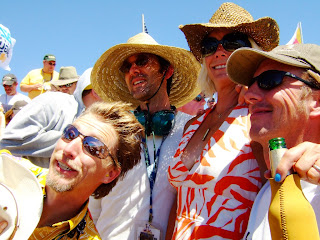 Here is a little quiz for you: where was this picture taken? Burning Man or Laguna Seca?

This picture could've been taken at either event: The hats, the funny hair, the beer cozies, the ear-to-ear grins, the blue sky.

The races at Laguna Seca though have a couple added bonuses, for me anyway: you get to see the fastest guys on motorcycles in the world, and: it's right in our back yard.

And, thanks to Mike and Danielle, Arne and Michelle and Jim and Milli, all I have to do is get on my motorcycle with my tent and sleeping bag and show up to the best organized camp ever with everything and enjoy myself. And I did have a great time, thanks you guys! 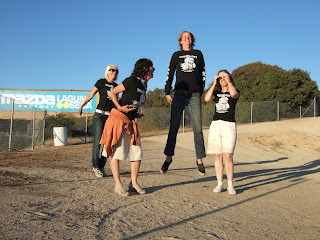 One great thing that happened is Marco Melandri getting on the podium despite a foot injury. He just overcame the obstacles and kicked butt. It ain't over until the fat lady sings, and she didn't sing yet! Go Melandri, never give up!

And I picked him on the podium in the pre-race bet and won a t-shirt that Arne and Michelle got at the MotoGP race at Valencia. Yeehaa!
Posted by Jennifer Werkstatt at 4:59 PM No comments:

Time to smell the roses 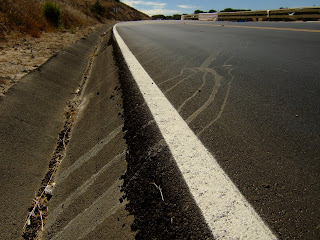 This picture here is the aftermath of yet another motorcycle overheating fest at the MotoGP at Laguna Seca this year.

When I heard it'll be in the 70s for this year's MotoGP at Laguna I was relieved. Not only for my own comfort but for all those poor bikes that had relentlessly overheated last year trying to get into the track.

But I was wrong.

It was pleasant for us humans (although it did get pretty chilly camping at night). The bikes however, if you got caught with the coming-to-the-track-at-8.30am- crowd, had a hard time once again.

Although it was cool, being stopped in traffic is hard on any bike. All newer bikes are liquid cooled and made for speed, so going slow or not going at all gets even the coolest running bike into the red.

On many modern motorcycles the fan never comes on under normal operation (i.e. on the gas, and getting air flow cooling through the radiator), so when it does, a little bit of corrosion makes the fan stick a little initially. This makes the dedicated 30A fan fuse blow, and then results in a non-operating fan and an overheating bike.

My bike circled between 220F and 225F, which is totally borderline. I was glad I checked the fan operation before I left by letting it run and monitoring the temperature until the fan comes on (or not, in which case you need to check out why).

Still, I thought that was a little hot and I was prepared to switch my bike off at any sign of fluid leakage.

Unfortunately, a lot of people were unaware of their bikes leaking. There was one poor motorcycle that got kicked even though it was down already - literally: it leaked coolant AND was already obscured in cooling fluid smoke, kept dying, and the owner still tried to re-start the bike every time it died.

And although I usually don't exercise empathy for inanimate objects, even motorcycles, THAT made my heart hurt. Argh!

That's the time when you evaluate how much it is worth to you to not miss first practice in the morning. Is it about $2000 or more? Which is what it costs to get rebuild the engine or even swap one that you got form ebay.

Time to smell the roses (or the smell of overheating motorcycles...as long as it is not yours...) since there was no way for ALL of us to bypass traffic, since traffic consisted solely of motorcycles with the same problem.

In any other situation, the solution is to (safely) split lanes and keep the bike moving. After all, that is why the lane splitting law was adapted in California, not to keep cool bikers moving, but to keep hot bikes cooled down.

But at Laguna - yet another overheating mayhem, but apart from that it was a great and very fun weekend, and I can't wait until next year, and now I am writing another blog that deals with all the fun times we had...

Cheers!
Posted by Jennifer Werkstatt at 9:54 AM No comments:

So...last Sunday night I got a nail in my tire. On the Richmond Bridge.

I write about nails in tires, I get a nail in my tire. Second time ever! I guess I have been lucky.

Fortunately Rich Gibbons from Berkeley Performance Motorcycles picked me up at 11pm on the Richmond Bridge. It's great to have good friends. Thank you, Rich, you are the best!

Two weeks ago, after writing about chains breaking - my chain breaks.

If I win in the lottery this week, I'll mount free tires for a week at the shop...promise!

So wish me luck, you might get a free tire out of this...

(update: Didn't win the lottery. So much for good old sayings. Back to the drawing table on how to get filthy rich.)
Posted by Jennifer Werkstatt at 7:49 PM No comments: