Posted by Jennifer Werkstatt at 1:27 PM No comments:

We would like to invite you to celebrate our 16 year anniversary with us
At Werkstatt, 3248 17th st, San Francisco,
this Saturday, 9/25/10, from 10-7pm.
Here's the program:
10-noon, $30 dyno runs. Please RSVP so we know what to expect!
Noon: Firing up the grill! Free Sausages and Kraut and Potato Salad a la my grandmother, served by Christine. We will also have German Spaten beer, one of my hometown breweries from Munich. Dirndls and Lederhosen encouraged...
Raffle! To help the Werkstatt Mavizen Team to race in Spain to battle for the World Championship in TTXGP (click here to see how the electric racing went this year...spoiler: I got second in the US TTXGP and am really excited about the progress electric bikes have made in this short year).
We have a ZoomZoom Trackday to raffle off, helmets, jackets, hair cuts from Colorbox Salon, etc etc. It'll be good!
We will also be having a store wide sale, 20% off and Galfer is coming buy to show some of their new products.
Oktoberfest Time at Werkstatt! Can't wait. See you there.
Prost!
Posted by Jennifer Werkstatt at 6:13 PM No comments:

Sock it, man (burning out his fuse up here alone)

Sheesh, what are the chances that a post would come along that works better with the Sock-it-to-me gag? Well, whatever. I'm going to do the manly thing and not doctor the old post's title to the benefit of this one.

Instead, I'll opt for an admittedly more mediocre pun and pose a question to you, our clever readers. How do you modify an aftermarket air filter that's now bringing in TOO much air to your mixture? 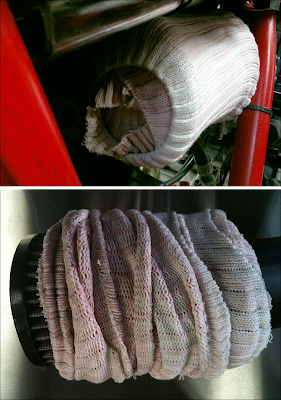 Not one, not even two, but four layers of sock apparently deliver the optimum fuel-to-air ratio. Hats off to you, MacGyver customer, you have my respect.
Posted by Will at 9:01 PM 1 comment: 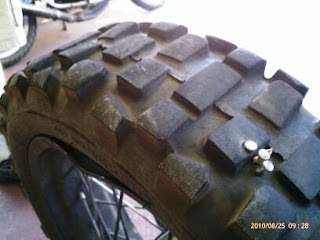 This is Nail City. And we got the record here. Three nails! Looks like a bouquet really, of nails, and not of flowers, and receiving this particular bouquet was not pleasurable. Flat tire, in the middle of nowhere, argh!
It's a big mystery where all these nails come from, and how do they get lodged in the tire like that??? We are open for suggestions...
Posted by Jennifer Werkstatt at 6:51 PM 2 comments: 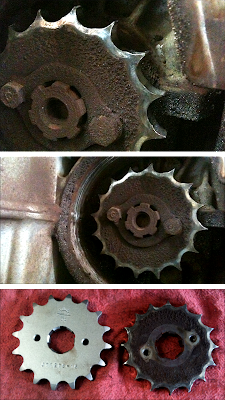